PRII Enjoys an Electric Day Out!

Last Saturday a group of 140, including PRII members, their families, friends and guests of ESB, were informed and entertained at the Ardnacrusha hydroelectric project in county Clare.

The inaugural #priibigdayout got off to an early start as members boarded our very own carriage for the train trip to Limerick.

On arriving in Ardnacrusha the Teddy’s Icecream van parked in the carpark by the Visitors Centre was a very good omen for the gloriously sunny afternoon that was to unfold.

Getting proceedings underway ESB’s Head of Corporate Affairs, Bernardine Maloney, MPRII welcomed us and outlined the longstanding connection between ESB and PRII. Ned Lawlor, one of the founding fathers of PR in Ireland joined ESB ninety years ago this year to set up the PR department. He then led early PR campaigns to highlight the transformative power of electricity and went on to become the First PRII President in 1953.

As the group was eager to get inside the huge power station and see the head-race (canal) which by way of a 30 metre fall delivers 400 tonnes of water per second to the station’s turbines, formalities were kept to a minimum.

Photos from the day can be seen on the ESB's Flickr: 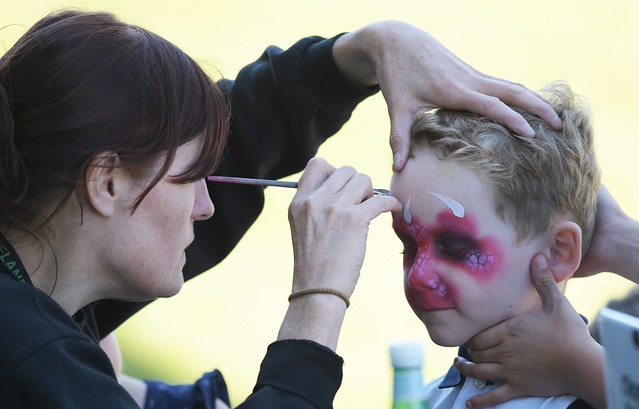 PRII Chief Executive Martina Byrne did say however that this was an unusual and fun event for the PRII team to work on as we had never had a Family Day before. But judging by the success of last Saturday it will be an annual feature in the PRII calendar from now on.

She also noted that in the history of PR in Ireland Ned Lawlor’s contribution was the first example of a nationwide, strategic, public information, public affairs and public relations project.

“And a very successful one as well. In the 1920's Ned Lawlor knew his stakeholders, knew their information needs and wants, and he knew how to reach them.”

Indeed an early (hand typed) edition of the PRII Digest noted in July 1954 that:

“Mr Edward A. Lawlor, our Chairman, who has heard many compliments on public occasions recently on the benefits gained from PR work by the Electricity Supply Board of which he became PRO in 1928 (possibly the first in Europe, indisputably the first in these islands)…"

The allure of face painting, balloon sculptures, gourmet burgers and 99s didn’t distract from the surroundings as visitors, aged from under 7 to over 70, wandered back in time to the 1920’s with the help of the ESB archives.

A display of original household appliances from an electric bed warmer to a jukebox provided great amusement. A selection of the posters and advertisements used down through the years charted how ESB communicated the benefits of electric power to the population.

The visitors centre set the context for the initial project which saw the fledgling Free State Government invest 20% of its budget (£5.2million) in the construction of the project, which in turn led to the development of the world’s first National Grid. In 1929 the power station met 100% of the country’s electricity needs. Today it meets just 2.8%.

The 1920’s industrial architecture was admired by many for it’s sheer size but also noted was the Germanic style to the building's design and especially its roof. Due no doubt to the influence of the Siemens Schukert company which actually built the facility.

The afternoon flew and both young and old boarded the bus back to Limerick train station having thoroughly enjoyed themselves, made new friends and possibly empowered a future generation of PR people. Although there seemed to be more sleepy adults than kids on the train ride home.

As Martina said on the day none of this could have happened without the collaboration and generous sponsorship of ESB and Iarnrod Eireann. Special thanks are especially due to Bernardine Maloney, Paul Hand and Máire Scully in ESB as well as the Station Manager and all the expert guides in Ardnacrusha.

Similarly thanks to Barry Kenny and Stephen Hackett in Iarnrod Eireann for the loan of the train and their teams in Heuston, Limerick Junction and Limerick train station itself who made sure we were comfortably and seamlessly transferred on and off the train and thankfully no one got left behind!

Pop over to the PRII Facebook Page (below) to see more of the day.